On Priceless Farms, and other installations developed by Love On Land, dogs play a very important role.  On Priceless there are no less than 12 dogs on the property and Aaron is always on the lookout for new recruits to his K-9 crew adding a new member recently with a dog rescued from the streets of Kampala. The dog had been badly abused and cowered from the hand of anyone that would approach her. She spent a week at the local SPCA to under-go treatment and get the necessary shots to save her life. We paid the bills and took her to the farm this last week. She was integrated into the pack and within a couple of days she was responding well and fitting right in. 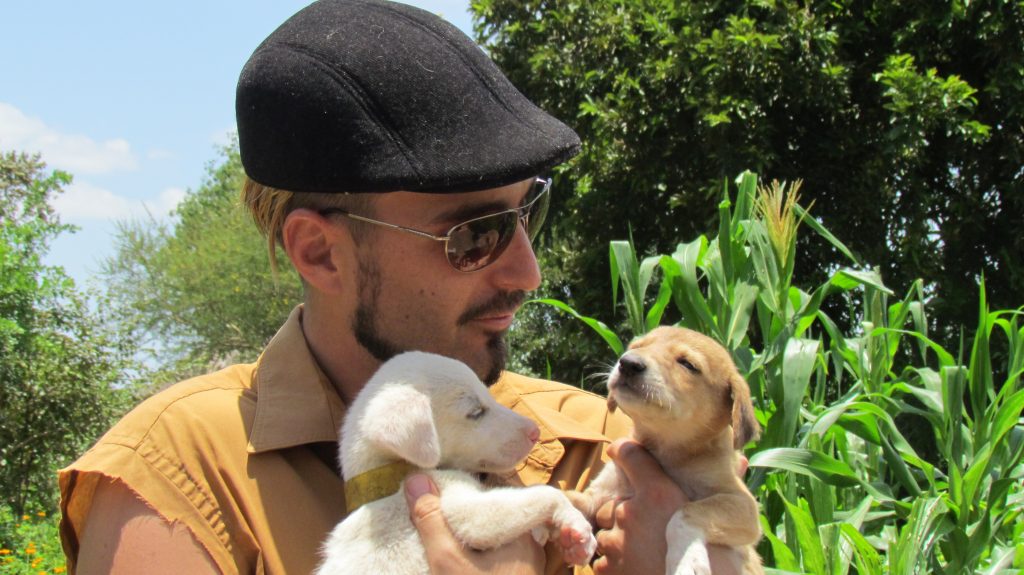 Also recently, two small pups that were abandoned on the road-side and left to die. Their bodies were infested with red ants when Aaron found them. They were cleaned and fed and are now installed with the manager and his wife on the Lift The Children site (another LOL project) adjacent to the Priceless property. The cost of rescuing these faithful workers and companions is small compared to the value they bring to the operation.

They are or course first responders to any unknown intruders to the property and they are very protective of “the pack” which they know instinctively includes all of the residents and workers on the farm. They are not vicious and they are trained to cooperate with each other and strictly disciplined if acceptable behaviour is breached. The farm has ducks, chickens and goats and the dogs know that these are all valuable assets not to be molested under any circumstance. The dogs are well fed and cared for and have their own barracks; shelters that they’re are regularly confined to and rotated on shifts throughout the day and night. They all have a job to do and they understand it very well. 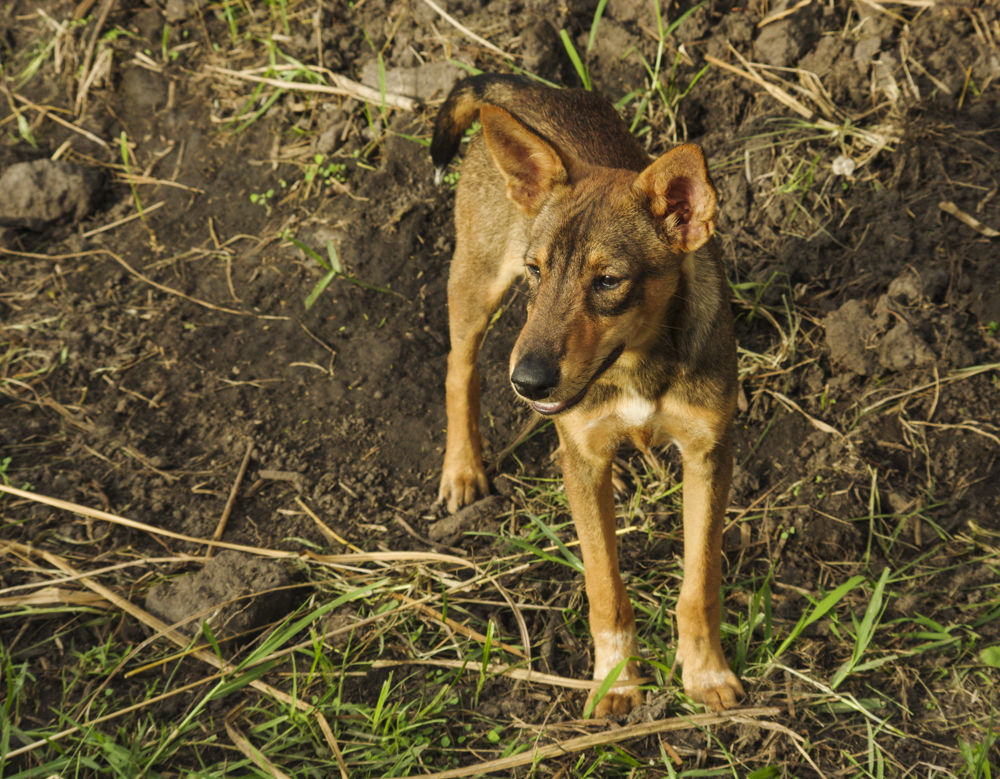 Whenever workers are in the field or traversing throughout the farm’s various camps there is a always a dog or two in attendance. When the truck leaves Base Camp 1 to travel to the other camps and shambas, at least two dogs run shotgun, scouting the way forward and tracking through the bush on either side of the road. It looks like they are just having a lot of fun. And they are obviously loving it but their presence is very important.

This is a tropical environment and jungle-like in many areas. It is the philosophy and design of the farm to respect the value that indigenous animals bring to the ecosystems of the farm and they are protected rather than eradicated, the latter being the practice of many farmers in the region. Among these residents are snakes; cobras and boa constrictors among others. The snakes are not a direct threat to humans. They prefer to be left alone and avoid human contact but can be lethally dangerous if caught off guard. The dogs are very vocal and announce the approach of people and it would be unusual to even see a snake when the dogs are around.

Recently however, there was an incident that demonstrated the value of the farm’s dogs in protecting their human charges, but this time it was the dog that required rescuing rather than the other way around! 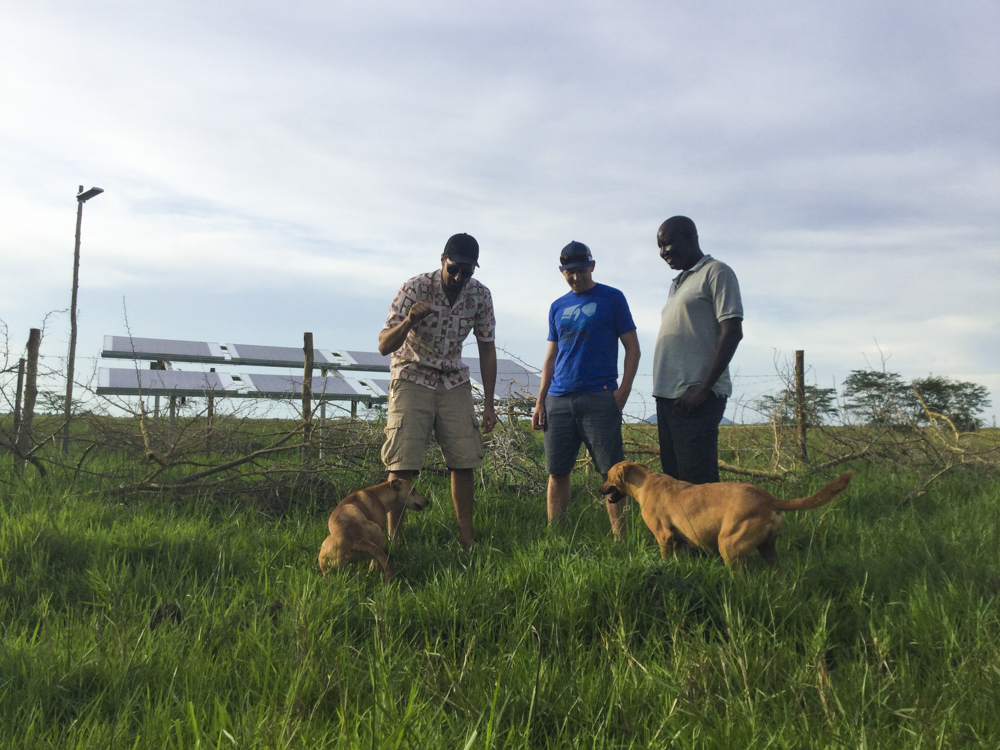 At the north end of the property next to the lake is the farm’s fish pond operation. There is a small camp of workers that live at the site and maintain the solar panels that are used to pump water from the lake up to the rest of the farm. There are two holding ponds on higher ground that are constantly fed by the pump and used for irigation. There is also a dock and floats on the lake itself with several fingerling cages that grow fish for market. There is always a caretaker living on the float to protect these cages and it’s where the farm’s power boat is kept. In order to get to the doc there is a channel that is about 6 feet wide that is dug out of the hyacinth growth that covers the foreshore of the lake. To get to the float and the powerboat it is necessary to take a small oar-powered skiff through the channel to the open water. 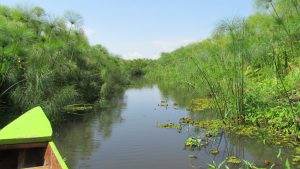 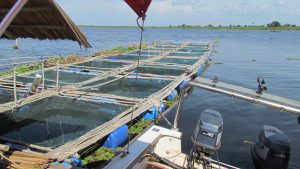 Aaron had a visitor from CARE international that was eager to tour the fish growing operation and his guest and a couple of workers were in the boat rowing through the channel. The dogs were running along-side on the papyrus-thick banks.  Aaron’s personal porch dog “Browse” that sleeps every night on the steps of his hut at camp was along for the tour.

It all happened very quickly. A sharp yelp from the dog got Aaron’s attention and as he swung around to look back he saw that Browse had stumbled into the jaws of a large Boa-constrictor who was probably as surprised as the dog. But with the dog’s head firmly in its grasp the snake had coiled around the dog and rolled him into the channel and under the water. Adrenaline took over and Aaron jumped into the water, just waist deep, and pulled both snake and dog to the surface to see what could be done. First he tried to see if he could gain the release of the dog from the snake’s jaws but instantly saw the difficulty and the danger to himself if he was to succeed. This was a formidable 14 foot snake! The snake was preoccupied with the dog, locked on, and not to be dissuaded from his intent.

Now there is a lesson to be learned here. Aaron always carries a sharp readily available knife on his person–at all times. Each and every one of the workers on the farm is also given such a knife and ordered to carry it always, as a tool and self defence if required. If a worker is found not carrying his knife he is in danger of forfeiting it.

Not being in the business of killing snakes he was loath to take the next step in this rescue — to kill the snake — he just couldn’t let his dog be taken this way. He had the snake in hand just below the head and plunged his knife deep into its neck and pulled up at an angle to sever the spine. The snake slumped and died immediately. The adrenaline still pumping and his heart racing it took hours to come down from the physical high that induced him to take immediate action without a moment’s thought.

Still, having to extricate the dog from the snake’s fangs was not easy. The rest of the crew was in a daze but they managed to get the snake in the boat and return to camp. Always with the presence of mind to record events with video and photographs, with cell phone in hand, Aaron recounted the adventure and the lessons learned about the value of a good dog and a sharp knife.

No re-enactment, but you’ll see the immediate aftermath
in the video link HERE

A short epilogue is appropriate.
Recently a boa constrictor killed a small dog at the Lift The Children site, a warning that these animals are opportunists and now with 19 shamba families living on the farm with numerous small children having the run of the property, dogs are an important early warning and perimeter defence. Aaron has installed dogs as a vital component in all of Love On Lands projects with well over 14 dogs in various locations. The first thing he inspects when visiting these installations is the health of the dogs. He knows that if the dogs are well cared for that the project will also be well managed.